Tell me if this sounds familiar:

Most medium-large projects I see are suffering to some degree from this vicious cycle: 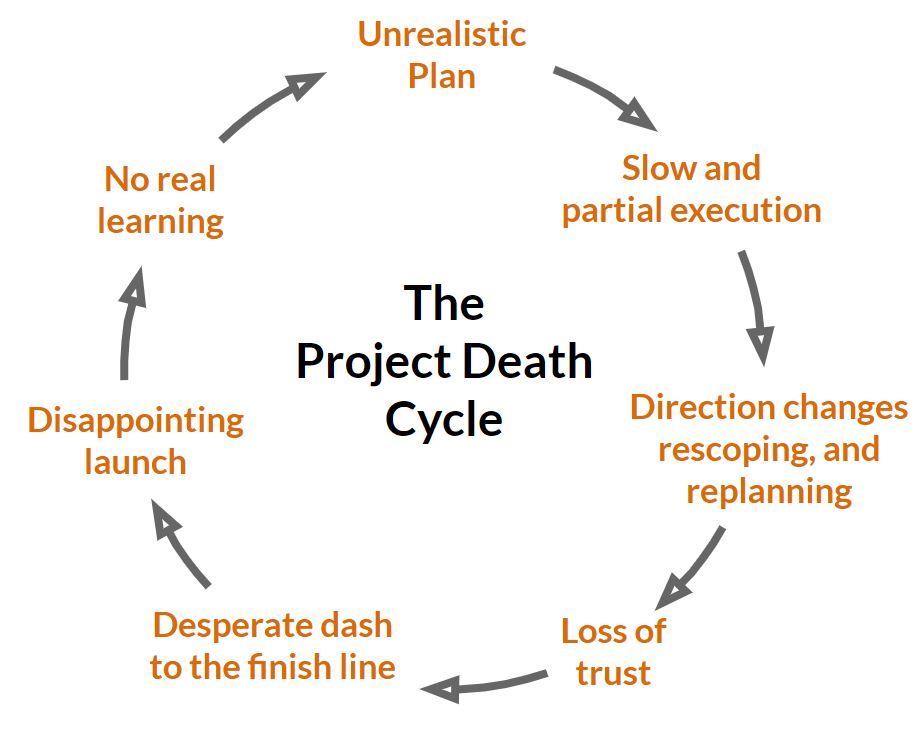 Why is this such a common phenomena? Are all managers clueless? Are all employees incapable?

The answer of course is no. There are actually a number of things at play, but in this post I want to focus on the biggest culprit — our blind and deeply ingrained belief in Plan & Execute.

Plan & Execute (P&E) is simply the method by which we start a project by creating a detailed plan and then follow with faithful execution. From the pyramids to jet fighters, P&E is how we’ve been building things and it has served us tremendously well.

20th century business management, starting from Taylor’s Scientific management, embraced Plan & Execute as a core foundation. Managers were given the role of planners and employees the role of implementers. Phase-gate/waterfall, roadmaps, gantt charts, business plans and strategic plans are variations on the theme. Over time detailed plans became a prerequisite for funding and the yardstick for project progress. Success defined as completion of the project as planned, on time and within budget.

In tech we largely inherited business management methodology from predecessor industries and with it came P&E — strategies, roadmaps, project plans, even requirements specs are forms of planning.

But here is where we ran into trouble. P&E that has served us so well for millennia, is running tech projects into the ground. The reason can be summed up in one word: uncertainty. Unlike bridge-building or car manufacture, high-tech is an industry riddled with unknowns — first-of-a-kind products, untested technologies, new markets, unexpected competitors, and fickle customers. Nothing we have built in the past was this unpredictable. To complicate things further, our means of production, software, is itself a type of technology that is infinitely malleable, constantly evolving, and highly prone to generating defects. The bad news — under conditions of high uncertainty our ability to create realistic plans and to execute them accurately drops sharply — in some cases to near zero.

Let’s break this down a little more to understand why:

“It is humbling to see how bad experts are at estimating the value of features (us included). Every feature built by a software team is built because someone believes it will have value, yet many of the benefits fail to materialize.” Microsoft research paper, 2009

In my Lean Product Management workshops you’ll learn how to develop product strategy, research your market, set goas, prioritize ideas, experiment, and work effectively with managers, agile teams, and stakeholders. I include unique frameworks and tools such as GIST, the Confidence Meter, and the AFTER framework, which you won’t find anywhere else.

But It Gets Worse

In tech we have also inherited the practice of multi-level planning. Our best practices look something like this:

I call this “the planning waterfall” and it complicates things further:

Plan changes and delays are also a major source of discontent and friction. Employees expect smart, well researched, accurate plans. Managers expect ambitious but achievable schedules, efficient execution, and completion on time and on budget. As neither side is actually capable of delivering on these expectations, mistrust and frustration grow. When projects go sideways, as they often do, toxic cynicism and finger-pointing can ensue, as well as feelings of guilt and hopelessness. The thinking is often that “wrong culture” and personal inaptitude are the root causes, people leave disgruntled or are asked to leave. An outsider view will typically reveal that the no one is directly at fault, but everyone is locked into a bad system.

What can we do about this?

Let’s start with the things that don’t work:

Things that do work

Over the years good methodologies have attacked parts of the problem from different angles, the most important ones being:

Done right each one of those should have a major positive effect. However we have found ingenious ways to merge those into what is still essentially top-down Plan & Execute: OKRs that are all about executing the plans, water-scrum-fall projects with no customer input, a pinch of “user research”, and sprinkle of “MVP” that never actually change the plan, and so on. The pain and waste is still there because at its core the planning system hasn’t changed.

GIST is the planning system that I started using while working at Google and later further adapted based on the principles of Lean Startup and Agile Development. I’ve since introduced it to multiple companies.

With GIST we decompose planning into four tiers: Goals, Ideas, Step-projects, and Tasks. Each has a different planning horizon and frequency of change, and may use different tools to track, but together they constitute all the core planning any company and team needs to do.

I first described GIST in this blog post. The response was very positive — people have asked to hear more. I am now writing a condensed book that will explain how to implement GIST in practice, due later this year (sign up to my newsletter to receive updates and a chance to be an early reviewer).

Whether you use GIST or something else, the good news is that abolishing Plan & Execute is now a real possibility, one that tech companies are already embracing. It is not a quick and easy transition — core things including mindsets and beliefs have to change , but luckily they don’t have to change all at once. Once the new planning system is put in place the results are very consistent — lightweight plans that are built for change, lower management overhead, improved team velocity and autonomy, better cross-company alignment and ultimately better products and solutions.

Itamar Gilad (itamargilad.com) is a product consultant and speaker helping companies build high-value products. Over the past 15 years he held senior product management roles at Google, Microsoft and a number of startups.