Finding and building the next big idea is the holy grail of any tech company. Unfortunately the statistics are against us: when subjected to A/B testing most ideas turn out to produce no impact or even negative impact, and at least one analysis suggests that you need 3000 raw ideas to produce one commercial success. Consequently most “big bet” projects flop causing a lot of wasted investment. Some think that this us is just the way it has to be — with big ideas comes big risk, however the billion dollar question is: is there a way to tell if an idea is any good before making the big investment?

As it turns out there is, and it’s not even very complicated to practice:

To make this less abstract I created two simple tools you can use right away.

UPDATE: I’ve since created a third tool that combines both – the Confidence Meter (you can download it for free), but I recommend reading this post for deep background on the motivation behind the tool. 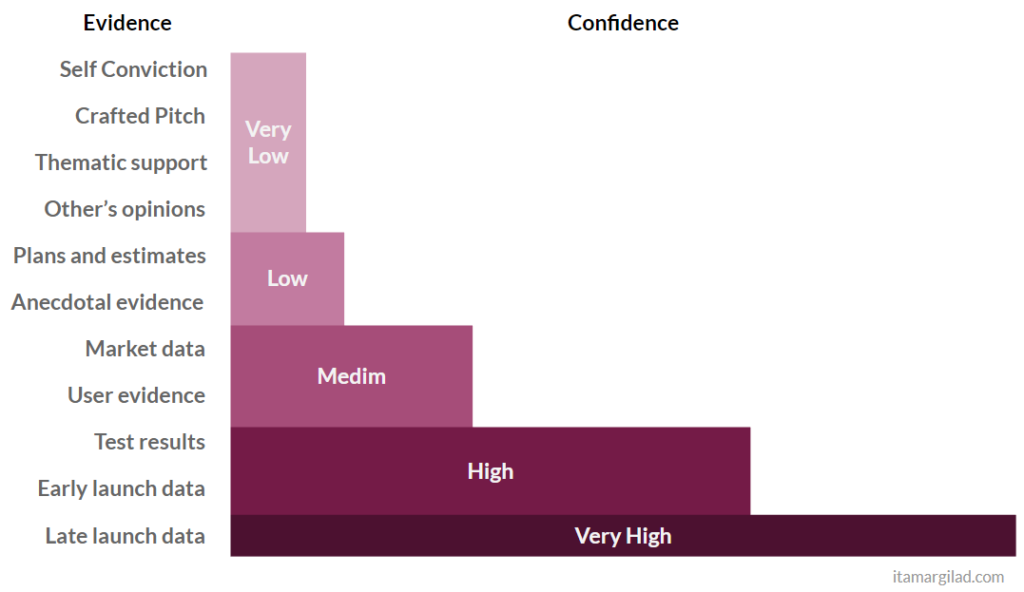 If you’re short on time just use the following chart. On the left I listed some of the most common ways people and companies validate ideas, and on the right how much confidence can be gained from each.

As you can see the activities we tend to perform early on in a project, while important, don’t really verify that the idea is any good. A good pitch and supporting “market research” don’t give us much confidence. In fact statistically speaking we must be quite skeptical of an idea at this stage, just because very few ideas are winners. It’s only the latter tests that give us any substantial proof of validity. Here’s why:

The unfortunate fact is that most companies miss the difference between low medium and high confidence and quite happy to launch projects with only Very Low to Medium confidence. Let’s look at some of the most common false signals and misconceptions.

Sign up to my monthly newsletter to get product management articles, tools,  ebooks, and early-access opportunities in your inbox.

When comparing multiple ideas it’s better to give each one a detailed score. Use this table to score your idea, then read what it means at the bottom.

1. Self Conviction — Add 0 points for each

To learn how to use this and other Lean Product Management topics join one of my public workshops, or contact us to organize a private workshop for your company .

5. High level plans and estimates — Add 5 points for each

6. Anecdotal evidence — add 20 points for each

8. User/Customer evidence — Add 500 points for each

Note: this is a generic list of tests that most software products can use. In your industry there may be others that are more relevant. The important thing is to decide how indicative they are and to put them into the right confidence bucket.

0–5 points — Very low confidence — This idea is almost entirely based on opinions and theory rather than data and fact. Even the most experienced and successful product minds struggle to forecast which ideas will succeed. Google, Twitter, AirBNB, and Android were all rejected almost universally as unsustainable product ideas, while Google Wave, The Semantic Web, Apple’s Newton and Windows 8 Metro UI seemed like great ideas at the time. You should not assume that you, your managers, peers, investors or outside experts can do any better. Thinking through your ideas and getting others’ feedback is crucial, but don’t assume it’s sufficient — you need to get out of the building to find the opinions that matter.

Vision and strategy statements, as well as most industry analyst reports tend to be very high-level and abstract, and are just as bad at predicting the future. Riding the waves of Industry trends (for example VR or Wearables) or basing your idea on a current product/design paradigm (micro-apps? SoA?) doesn’t give it any more credibility either. Trends and buzzwords are way too simplistic to apply to every product, worse they tend to change every few quarters. There’s no way to theorize your way into building a great product.

6–100 points — Low confidence — You’ve started checking the feasibility of the idea through cost estimates and a rough plan. You saw that business numbers add up and maybe even created a business model canvas or a business plan. That’s a great step forward. Beware of the planning fallacy, though — we tend to be overly optimistic about both cost and impact of our own ideas. Same goes for your business plan — it’s mostly guesswork and this point and needs to be validated and adapted to reality.

Anecdotal evidence is helpful (in fact many ideas stem from anecdotal evidence) — it shows that at least some people out there agree with the idea. However we humans can easily see patterns and trends in noise. Statistically speaking this is not much proof either. You’ll need to get more real data and listen to many more potential users to grow in confidence.

101–500 points — Medium-Low confidence — Surveys, smoke tests and competitive analysis give you initial outside data, but your confidence is still just medium-low because you’re working with small samples that can easily be skewed or misinterpreted. Still you’ve started learning and improving (or abandoning) your idea based on objective evidence — an important milestone.

501–2000 — Medium-High confidence — You’re using quantitative and qualitative research to test the main hypothesis of your idea. You should feel proud — most product teams don’t go this far and miss out on critical data and facts that could have significantly improved the product. If successful your confidence in the idea should be majorly boosted. Still, testing a simplified or partial version of the idea with small groups of users isn’t enough to confirm the idea is worth launching. Keep going!

2001–10,000 points — high confidence — Now you’ve gone the extra mile to thoroughly test the idea, by now an early version of the product, with bigger groups of real users for longer duration of time. No longer an experiment in the lab, this is as close as it gets to the real thing. If you got good results here you should feel fairly confident you have a winner — launch it!. Still, sometimes statistics or an unexpected snafu can play a nasty trick on us, so be optimistic but watchful.

10,000+ points — very high confidence — Congratulation — the idea is now a launched! Still, in the weeks and months after launch there’s still some level of uncertainty about how the product is performing as well as novelty effects. This is not the time to let your guard down — keep processing the data and interviewing people to make sure you’re not missing anything.

The “Good Idea” badge — You made it, you can confidently say you made a dent in the universe and improved people’s lives, even if in a small way.

Obviously you don’t have to run every idea though every test in the list. Certainly for big ideas that require substantial investment it is good idea to to go through the test groups and perform at least a couple of things in each. Some data-driven companies like Netflix and Booking.com skip the early conviction/thematic-support/pitch phases altogether and empower their teams to A/B test almost anything. Other companies rely much more on qualitative research. Either way, doing more, especially of the mid and late tests, is very important. 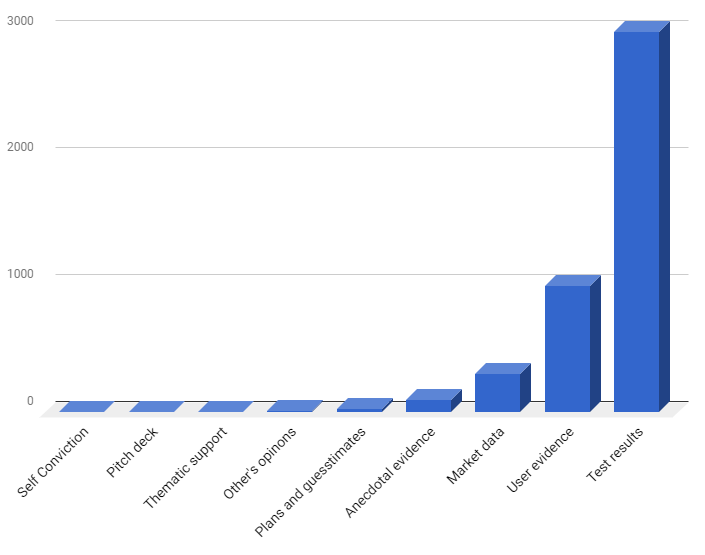 You can see that confidence level stays very low for awhile and then grows at exponential rate as hard evidence is collected. Most ideas will not get to this point and will be either abandoned or modified along the way, but that’s just how it needs to be.

Why is this Important?

All too often I see companies going all-in on a project armed with very little supporting evidence, usually trusting gut feeling, anecdotal evidence or at best sporadic market data (“a survey we ran shows that X% users want this feature”) — a score of 100 points or less. Worse, corporate execs seem exempt from even the most basic validation and can greenlight an 18-month project solely on the basis of self-conviction, “market data” or a strong pitch — a score of 5 points or less. This is a highly destructive pattern that is not only wasting time, money and energy, but is also highly demoralizing for employees and middle management. It just seems unfair and wasteful to work on a death-march project that is going nowhere while other, potentially better, ideas are left on the sideline just because they didn’t gain favor with management.

By not looking confidence-scoring projects we’re also likely to underestimate or overestimate risk. For example companies trying to build an innovation portfolio, say with a 70/20/10 innovation mix, often fail to evaluate the risk inherent in their core projects and are thus failing to manage risk properly.

Using evidence-based scoring can simplify a lot of these investment decisions and make for a more systematic and transparent way to move forward — if an idea passes a validation phase it allowed to get more funds — just enough to move through the next phase, otherwise it is stopped. This allows for cheap exploration of many more ideas and for launch of the ones that are genuinely high-impact.

People with the “just do it” execution-biased mindset usually raise these objections:

Itamar Gilad (itamargilad.com) is a product consultant helping tech companies build products that deliver and capture tremendous value. He specializes in product strategy, product market fit, growth and innovation. Previously he was lead product manager at Google, Microsoft and a number of startups.

Originally published at https://www.linkedin.com on August 12, 2017.